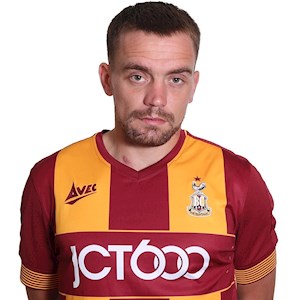 The attacker arrived at the Bantams on a free transfer having left fellow Sky Bet League One side, Peterborough United at the end of last season. The 29 year-old who began his career in non-league with Vauxhall Motors was once part of a deal worth £1.5 Million which saw him move from Peterborough United to Ipswich Town, who at the time were managed by former Bantams boss Paul Jewell. The lively Liverpudlian started to climb the footballing ladder when he switched from Vauxhall Motors to Chester in March 2009 and after two years with the club, he signed for Peterborough United for the first time in March 2011. During his first spell at London Road, he made 53 appearances and scored 14 goals and his form alerted the attentions of bigger clubs; one of which in the form of Ipswich Town who paid a seven figure fee for his services.  Partially due to an injury which kept him out of action for a year, Taylor didn’t quite hit the heights he would’ve hoped for at Portman Road. During his four years at the club, he made just 25 appearances and spent time out on loan with Peterborough United, Rotherham United and Blackburn Rovers before a return to ‘The Posh’ in July 2016 on a free transfer. During the 2016/17 season, Taylor made 47 appearances in all competitions and scored 6 goals.