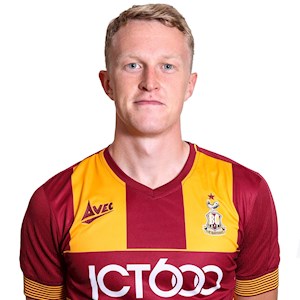 Boyhood City fan Luke Hendrie moved to the Northern Commercials Stadium on loan from Premier League side Burnley this August. Hendrie will remain part of Stuart McCall’s squad until the start of January. Hendrie made 33 appearances with Scottish Premier League side Kilmarnock during a successful loan period last season. The right-back, who is the son of legendary former City attacker John Hendrie, also has experience of playing in the EFL. He featured on loan at York City and Hartlepool United in Sky Bet League Two during the 2015/16 campaign. The defender actually spent a period in the youth set-up with the Bantams earlier in his career before signing his first professional contract with Manchester United. After a year in the professional ranks at the Red Devils, Hendrie spent two seasons with Derby County, also in their development squad. Having featured for City on trial during the Club's 2015 pre-season, Hendrie moved onto his current employers, Burnley.