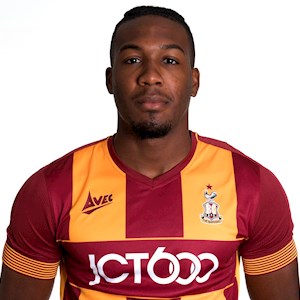 The powerful striker joined the Bantams from AFC Wimbledon in June for an undisclosed fee. The pacey attacker arrived at the Northern Commercials Stadium on a two-year deal. Formerly a youth player at Southend United and Leeds United, he began his professional career with the latter, making his debut for the West Yorkshire club in a 4-0 Capital One Cup victory against Shrewsbury Town in August 2012. The East London born frontman scored his first professional goal for United a month later in a 2-1 home victory against Nottingham Forest in the Championship. He bagged his second goal for the club on the final day of the 2012/13 season in a victory at Watford, after he had returned from loan stints in League One with Bury and Sheffield United. The energetic forward, who can play either as a winger or as a striker, scored 13 goals in 49 appearances in all competitions for AFC Wimbledon last season, including 8 goals in just 19 starts in League One. Poleon played the second half for the Dons in their 3-0 defeat to the Bantams here at the Northern Commercials Stadium at the back end of April. Dominic, who also scored 11 goals during a two-year stint at Oldham Athletic becomes the latest summer recruit for Stuart McCall’s Bantams with pre-season under a week away.